Review Trouble Along the Way Here

Dr. Strangelove: How I Learned to Stop Worrying and Love the Bomb (1964)

"Comedy films primarily serve one purpose, that is, to make us laugh our socks off!

generally by humorously exaggerating any given life situation or a person's actions. Every one likes a happy ending, comedies understand that and most of the time they deliver.

But there are many types of comedies and through the years (just like other genres) they have expanded or overlapped almost every other genre making combinations such as in the bizarre case of horror comedy,

how can this be? you may ask,

comedies are only supposed to make me laugh, well some one thought that making us laugh as well as cry would make for a great experience.

Just to name a few! 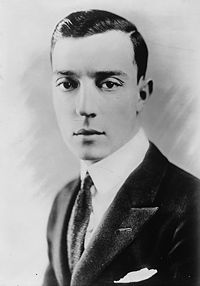 "1. Deadpan. Here most people think of Buster Keaton with his expressionless face while everyone's laughing themselves silly.

Primarily used during the infancy of the film industry. Man, oh man! How can he and people like him make everyone laugh without making a single face expression?

2. Screwball. Can be described as sophisticated romantic films with a touch of lunacy!

"Do you remember Charlie Chaplin?

of course you do! 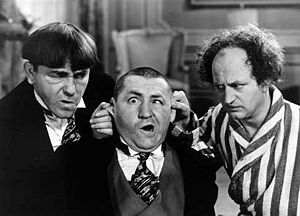 Well, they are the very definition of slapstick comedy, which literally means comedy based on intensional clumsy behavior and hilarious and perhaps embarrassing events.

4. Verbal Comedy. No explanation is needed here; let me just say though, that folks who verbally make people laugh in a "clean" way possess a 'real' talent.

5. Dark Comedy or Black Comedy. This type of comedy really embarrasses me to even write about (especially when speaking about modern-day films) for it entails anything containing death, or rape, or violence, tabooed subjects, cruelly mocking, satire, obscenity, obscurity, and the like.

Occasionally though, we do see some real good productions that can really get a good laugh out of us in this sub-genre such as it is the case with Dr. Strangelove (1964) How I Learned to Stop Worrying and Love the Bomb.

As most of us know there are always exceptions to most rules, especially when talking about Hollywood!

So we thank you for joining us as we sort out the absolute best comedies ever made for all us to enjoy! Let's get started then......"

Recommend Your Favorite Comedies for All of Us to Enjoy!

Return to the Conservative Movies Homepage
from the Comedy Movies Section