Expelled No Intelligence Allowed is by far the best movie (documentary) made about the concept of evolution.

Mr. Ben Stein, a speech writer and lawyer for Richard Nixon at The White House and then for Gerald Ford, does a superb job at exposing the great fault of evolutionary thinking and literally challenges the very foundation of the myth of the "Origin of Species". how? let him speak.

"Evolution and Darwinism do not explain a lot about life, Darwin said nothing about how life originated, Darwin had no idea about how complicated the cell was".

"Evolution says that lightening struck a mud puddle, and bam out of it came a fully equipped Boing 747", "and if anyone dares challenge this theory they are persecuted" this during a CNN interview.

From this you can kind of get an idea as to how this movie, approaches this 'taboo'd' subject, Darwinism, and how flawed it has become.

All in all, this is a must watch for the whole family, although it requires you to take much action after having seen it. Thanks Mr. Ben Stein

Rest of review below....

I will not even try to attempt to talk about the scientific part of how life began but I will say this.

The film clearly exposes the most fundamental question that we all assume science has already answered.

HOW DID LIFE BEGIN?

This is the only unbiased and most neutral question in the whole argument / war between those who believe in a creator and those who don't. 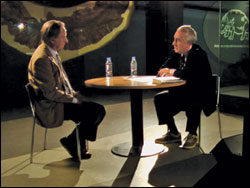 I supposed that Mr. Stein did not name his documentary along those lines because it covers more than just the convoluted argument of evolution.

It covers the activism behind the foolishness of Darwinism as well.

How atheists and evolutionists (who are all liberals) have managed to change the belief system of staggering masses of people throughout the United States and Europe is absolutely incredible.

Neither Richard Dawkins nor any of the other scientists on the film have been able to explain how life started on earth.

So, it is only natural to ask if no one knows, why are we acting like and "teaching" that "God DID NOT create" life?

Again, if we don't know, what makes anyone think that it was not God? The film even takes it further when it presents the viewer with plenty of evidence that only a "supernatural" event could have CREATED life.

For more on this, read Dinesh D'Souza 's article on townhall.com here..

There is no question about it, Democrats, better known to us as LIBERALS, have complete control of most of our society at almost every level, from our Government to the schools and even our churches.

How can this be?

The film brilliantly illustrates in the most simple of ways how LIBERAL ACTIVISM has transformed not only our places of learning but every aspect of our society. 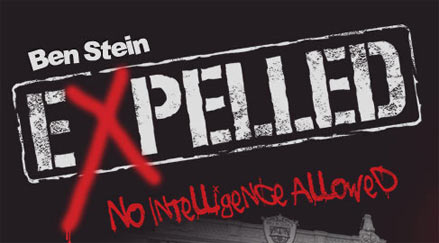 Return From Expelled No intelligence allowed to Movie Reviews