I Want Your Money 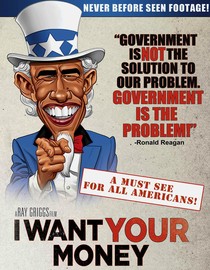 I Want Your Money

I was born in the early 80's and cannot really remember Ronald Reagan, but I do remember a roaring United States economy in the late 80's and a sense of patriotism throughout our nation.

Ray Griggs does a fabulous job at explaining while making it fun to watch the history of how we got to the America that we all remember and how we got the America under this anti - American president obama.

He uses clever and real funny cartoons to make a lot of good points, you actually, kind of, get used to the Reagan cartoon with his wisdom leaping off the screen in a delightful way.

The type of leader Reagan was seems almost foreign and unheard of in this day and age of thuggery and thievery coming out of state and local officials, so in that sense also, we dearly miss President Reagan.

The Contrast Between Reagan and obama

It is evident in this documentary that Ray Griggs is trying to make the point that America has a decision to make, even though we have been here before. She must chose between Reagan economics and obama's socialism.


Reagan believed in the free market across the board, Griggs' film focuses on the small business owner. I am not real sure if that is actually where Reagan focused the most.

Griggs makes it really simple, although I personally think the cause goes much deeper than this, but his point is that obama is a committed socialist and is taking our country in that direction by means of exploding our financial circumstances.


We really liked the film and hope you guys will too..