Never Allow A Crisis To Go To Waste: Barack Obama and the Evolution of American Socialism 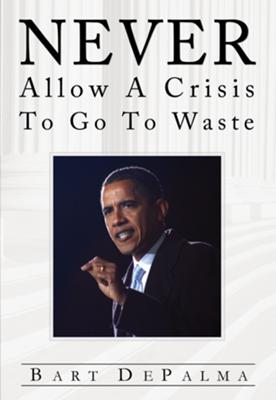 Never Allow A Crisis To Go To Waste: Barack Obama and the Evolution of American Socialism

Majorities of Americans believe Barack Obama is a socialist and that the President's policies are moving the United States towards socialism. But very few can explain why they share this belief.

Never Allow A Crisis To Go To Waste demonstrates why the American people are right.

Author and attorney Bart DePalma explains how socialism evolved after the collapse of the Soviet Union from classical state ownership of the means of production into a new asymmetric form, using progressive tools to achieve socialist ends, while misrepresenting the result as pragmatic "reforms of capitalism."

After winning election as a post-political centrist, President Barack Obama ruthlessly put the full evolution of socialist theory into practice, from the classical socialism of his nationalization of Chrysler and General Motors to the new asymmetric approach of his "clean energy economy" and "Obamacare."

Taking readers on a fascinating journey through the shadowy world of Obama administration czars to the "Tea Party" demonstrations besieging Congress, DePalma builds a persuasive case that American socialism is not only alive and well, but is also challenging the very proposition of the American republic.

In Never Allow A Crisis Go To Waste, DePalma reveals:

> After nearly going extinct during the 1960s and 1970s, American socialism transformed into a guerilla political movement, seeking political power by running its candidates as Democrats and by imposing "non-reform reforms" designed to plunge the capitalist system into crisis. With a large dose of serendipity, this strategy succeeded.

> Becoming a "pure Marxist-socialist" while attending university, Barack Obama entered politics as a fusion candidate of the Democratic Party and the socialist New Party. Obama saw elected political office as a vehicle for community organizers to wield the power of the state "to bring about massive economic change." However, the ambitious young man rapidly climbed the rungs of political power by offering himself as a post-political pragmatist selling undefined hope and change.

> The first successful "non-reform reform" was the government creation of the subprime home mortgage market. ACORN and other "social justice" organizations convinced the Clinton Administration to view home ownership as a "civil right" and pressure banks to make no-money-down home mortgage loans to the non-creditworthy. The inevitable mass default of the resulting subprime mortgages in 2006-2007 followed by the September 2008 stock market crash assured the election of Barack Obama as the United States' first socialist president.

> When he enjoyed the power to unilaterally set policy under the TARP program, President Obama's first instinct was to employ classical socialism. Among his first acts as president was to nationalize Chrysler and General Motors. As Obama repeatedly told the American people: "We have no intention of running General Motors," the president in fact took majority ownership of the automaker and handpicked nearly the entire board of directors, while his secretive Auto Team chose the electric vehicles GM would produce and imposed a new dealership model which destroyed thousands of jobs.

> After ACORN and other radical groups terrorized the families of bank employees, President Obama personally threatened America's leading bankers that "my administration is the only thing between you and the pitchforks" and demanded that his administration set bank salaries and the banks give away homes for pennies on the dollar to defaulting mortgage borrowers.

> When asking Congress to enact his policies, President Obama abandoned classical socialism and employed a new asymmetric socialism. Derived from the German Zwangswirtshaft ("controlled economy") of WWI and WWII and the theories of French Marxist philosopher Andre Gorz, asymmetric socialism reduces business to the status of civil servants and directs its fundamental functions, while misrepresenting its actions as innocent "reforms of capitalism."

> President Obama's "clean energy economy" initiative implemented and dramatically expanded a decade old plan by a "blue green alliance" of labor and environmentalists for the government to ration and tax the coal and oil industries out of business while redistributing their wealth to create a government subsidized and directed alternative energy industry.

> Socialists and progressives were disappointed that President Obama abandoned outlawing private health insurance in favor of a government operated "single payer" health insurance system. However, the President's "Obamacare" system grants the federal bureaucracy the power to make every substantive operating decision for the nominally private health insurers including setting coverage, determining administrative costs, directing marketing and establishing the venues for selling insurance. In turn, the government directs all Americans to purchase the resulting government designed insurance. On the eve of Obamacare's enactment, Vice President Joe Biden reassured supporters: "You know we are going to control the insurance companies."

You can read a sample of the book as well as obtain the paperback and Kindle editions at Amazon.

The Nook edition is available at Barnes & Noble.

The Apple iBooks version will be available shortly.

Bart DePalma is an attorney with a law practice in the Colorado Rocky mountains. Before practicing law, he served as an Army infantry and intelligence officer, and is a combat veteran of the Persian Gulf War. Writing about politics and economics since high school, DePalma currently publishes the Citizen Pamphleteer blog. He lives with his wife Brenda in the mountain town of Woodland Park, Colorado where you might find them on a hike with their dogs.